LAS VEGAS, Sept. 12, 2019 /PRNewswire/ -- JanOne, Inc. (NASDAQ: JAN), a newly launched initiative with the focused intent of offering innovative, actionable solutions to end the opioid crisis, is proud to name host of America This Week and financial commentator Eric Bolling as its President and Chairman. 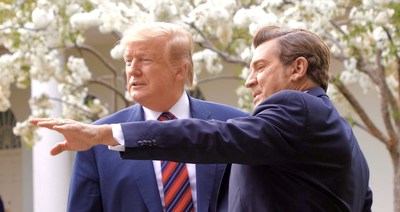 As one personally affected by the opioid scourge, Bolling has dedicated himself to fighting the opioid epidemic by executing the mission of JanOne: To help to end the opioid crisis by, among other things, developing revolutionary pain medications to replace today's highly addictive and often fatal opioids.

"I am elated to become part of JanOne and to help fulfill the mission of developing alternative, non-opioid pain drugs," Bolling said. "I'm drawn into this challenge—and passionately dedicated to it—by my determination not to see another father bury a child due to opioid overdose, as I have done. JanOne plans to bring to market a much-needed, non-opioid and non-addictive pain drug to meet the demands of a $60 billion a year market."

"Once our goals are achieved, doctors worldwide will be able to safely prescribe pain medications without the risks we see with the drugs of today. We are hoping this will lead to significant declines in people who get addicted and a significant reduction in deaths."

Bolling explained that the company "is currently in discussion with several potential partners, including universities and various corporations, regarding development and marketing of non-opioid pain drugs." He added, "Our goal is to develop medications that kill pain, not people."

After a successful career as a commodities trader, Bolling moved into media as a rising television personality. He helped to develop CNBC's Fast Money, hosted Fox Business Channel's Cashin' In, and was co-host of The Five and of Fox News Specialists. His New York Times best seller Wake Up America was published in 2016. Today, in addition to his executive leadership of JanOne, Eric remains engaged in political and social issues as host of America This Week on Sinclair Broadcasting and as host of AMericA on Blaze TV.

These accomplishments are backdrop to Bolling's passion for tacking the opioid crisis. On a terrible night in 2017, he and his wife Adrienne learned by phone that their only son, Eric Chase, a University of Colorado sophomore, had fallen victim to a Xanax tablet laced with the deadly opioid fentanyl. That call destroyed a family's happiness—but also kindled a craving to extract meaning from personal grief. As a tribute to his son, Bolling established The Eric Chase Foundation to educate the world about the opioid crisis and to lobby for preventive and treatment measures. His personal commitment to ending the crisis motivates his taking on executive responsibilities at JanOne, which was founded to develop non-opioid pain medications.

JanOne, formerly Appliance Recycling Centers of America, Inc., and subsidiaries, is a unique Nasdaq-listed company that recently re-positioned and broadened its business perspectives to combat the opioid crisis through innovative solutions such as developing revolutionary, non-addictive painkillers. The re-positioning is intended to open up significant new business opportunities while drawing private-sector resources into an urgent public health crisis. The company continues to operate its legacy businesses – ARCA Recycling and GeoTraq – under their current brand names. JanOne's subsidiary, ARCA Recycling, recycles household appliances by providing turnkey recycling and replacement services for utilities and other sponsors of energy efficiency programs. JanOne's subsidiary GeoTraq engages in the development, design and, ultimately, expected sale of Mobile IoT modules.

Stay Up To Date

Follow JanOne’s progress on fighting the opioid crisis and developing solutions that kill pain, not people.

Follow JanOne’s progress on fighting the opioid crisis and developing solutions that kill pain, not people.